The lakeside portion of the Lillinonah Trail is a nesting habitat for bald eagles and, as such, is closed annually from December 15 to March 15.

Upper Paugussett State Forest is criss-crossed with trails and woods roads, both marked and unmarked, that don't appear on the DEEP map. Keep an eye out for those blue blazes.

Hunting is permitted in Upper Paugussett State Forest. As such, wear blaze orange if you're out there when the season is open.

Beginning at the Echo Valley Road parking area, head south along the dirt road to a signed junction where the trail enters the woods to the left. This part of the trail traverses a working maple grove before joining a wide woods road and descending to the banks of Lake Lillinonah, a dammed, flatwater section of the Housatonic River.

Over the next 1.5 miles, the Lillinonah Trail gains and loses elevation in short, steep spurts, ascending up and around rocky outcroppings before dropping back down rocky and leaf-filled gullies. Intermittent views of Lake Lillinonah, the Shepaug Dam, and the wooded hills of Southbury on the opposite shore accompany this section before the trail takes a left and heads up—the first sustained gain of the trail—and inland through hardwood forest and dense stands of mountain laurel, the Connecticut state flower.

At 2.0 miles, the trail begins to descend again. In a couple of places, the trail has been rerouted due to damage from the May 2018 storms, but its well-marked and easy to follow as you lose elevation on the way back down to the water.

From mile 2.4 to mile 3.6 the grade levels out and makes for a very pleasant stretch of lakeside singletrack, heading first to the west, then turning south to hike along Pond Brook to a signed junction with a spur trail to the Hanover Road parking area. Past here, the trail joins a woods road and begins its second sustained chunk of elevation gain. The blue blazes soon break from the woods road and the trail continues to climb alongside a stone wall, eventually gaining its high point at 4.4 miles.

The final mile or so of the Lillinonah Trail runs around, up, and over several minor, rocky ridges, gaining before finally dropping, gradually, back to the maple grove and the Echo Valley Road parking area at mile 5.6. 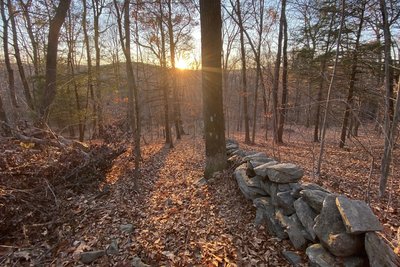