Parking at Kelly Beach costs a flat $10.00. At Poplar Beach it is $2.00/hour or $10.00 all day. The remaining parking locations are free: at the end of Wavecrest Road near the Baseball diamond, at the end of Redondo Beach Road (room for 50 - 70 cars), and 25 spots reserved for coastal access in the Ritz Carlton Hotel parking lot. All will fill early on a warm weekend.

This segment of the Coastal Trail runs south from Kelly Road in Half Moon Bay to the south end of the Ritz Carlton Hotel's golf course, with an extension trail leading to the stairs at Cowell Ranch Beach. I prefer this segment of the Coastal Trail over the segment that extends north from Kelly Road. Here the trail stays close to the undeveloped coastal bluffs, except for brief bends inland to get around canyons. In comparison to the northern segment, the bluffs are higher, the canyons are deeper, and it has a wilder feel.

From Kelly Ave (Francis Beach), the paved trail goes south 0.75 miles to Poplar Beach, one of the most popular beaches in the area. The sand extends for miles in both directions and is bordered by bluffs with numerous small canyons.

From Poplar Beach to the Wavecrest Open Space (at 1.4 miles), the trail is a wide, gravelly road. Wavecrest is an important wintering ground for raptors. It is covered with cypress trees and has a couple of beautiful spots to stop for lunch among the trees that overlook the bluffs.

There is no pavement or gravel road from Wavecrest to Redondo Beach Rd. Instead there are a series of alternative dirt trails. None are marked with signs, so there is no way to say which should be considered the coast trail. You can choose a straighter trail as I marked or trails that run next to the bluffs and then curve around canyons. Just before Redondo Beach, all trails suitable for bikes go inland about 0.3 miles in order to get around a shallow but long canyon. For healthy, flexible hikers, there is a rough, eroded trail which cuts across the canyon and also provides access to the beach. This shortcut saves over 1/2 mile.

From Redondo Beach the trail is again paved, except for a rough 30-yard section just before it enters the Ritz Carlton property. This rough spot would be a problem for anyone in a wheelchair. From there, the paved trail curves around the Ritz Carlton Hotel and runs high along the bluffs next to the golf course. In the middle of this section, stairs provide access to the beautiful Manhattan Beach, which has good tide pools.

At the south end of the golf course, there is a sign saying "End of Coast Trail". However a dirt trail continues on 0.3 miles to the Cowell Ranch Beach trail.This extension is used by hikers, joggers and bikers just as much as the official portion of the trail.

in Half Moon Bay

in Half Moon Bay 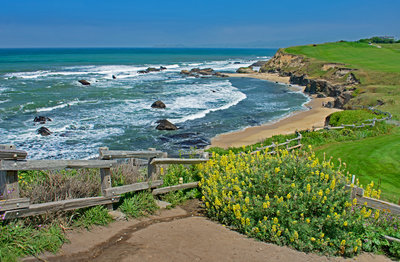 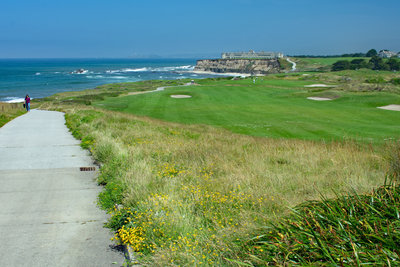 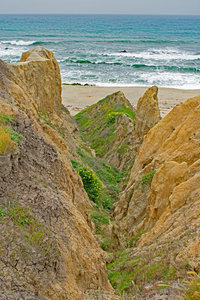