“Western section leads to spectacular Bart Dome and other formations; eastern two-thirds is unmaintained and difficult. ”

Wilderness permits are not required, but a campfire permit is required for campfires. Pets are allowed so long as they are under control and do not harass the wildlife. Except for the crossing of the South Fork of the Kern, the trail is good for early season hikes .

Information on rock climbing at Bart Dome: thecrag.com/climbing/united…, lists 16 routes on this dome, ranging in difficulty from 5.7 to 5.12c.

The first third of the Domeland Trail is reasonably maintained and only intermediately difficult. The eastern 6 miles are not maintained and are very difficult to follow. It leads to the South Fork of the Kern, which may be difficult, to impossible, to cross until mid-season.

The trail is most commonly used for access to Bart Dome, a rock climbing favorite. The trail also leads to off-trail routes going to other major rock formations.

The Domeland Trail branches off the Woodpecker Trail #34E08 about 1.6 miles north of the junction with the North Manter Trail-34E14. The beginning so closely parallels the Woodpecker Trail #34E08 that there are two signs, one at the immediate junction and one after about 100 yards. Unless it is early in the season or it is a wet year, you should probably get water at, or before, the junction.

The trail climbs 150 feet over 0.5 miles and then drops down a bit to follow Tibbets Creek. Tibbits Creek has at least three branches that join within in a short distance. All three had some water in mid-June 2019, but in other years, they may be dry by that date.

At the 1.3 mile point, the trail veers away from Tibbets Creek to climb about 100 feet to a striking saddle between Bart Dome and a set of unnamed domes. Before the saddle, there is a good climbers campsite under Bart Dome about 100 feet in elevation above the trail. Also before the saddle, there is a remarkable waterfall-like pile of white crystal rock about 10 feet high and 30 feet wide.

After dropping about 200 feet from the saddle, you'll see "the golf ball," a 7-foot tall rock that resembles a golf ball on a narrow tee. This marks the end of the maintained trail. Shortly beyond this, an off-trail route stays high on a relatively flat ridge leading to points overlooking Radiant Dome, North Domes, and Stegosaurus Fin.

From shortly below the golf ball, the trail drops only about 150 feet over the next mile, and then it veers back to follow first a tributary and then Tibbets Creek itself. Near the 5-mile point, the Stegosaurus Fin is only a short distance north of the trail and Rockhouse Peak is high above the trail on the south side.

At the 5-mile point, the trail is only 6,600 feet in elevation. By the time the water in the South Fork drops to a reasonable level for crossing, the remainder of the trail will be hot and arid.

The upper part of the trail has mixed conifer and pinyon pine and away from the trees there are millions of tiny flowers about 3-6 inches tall in a variety of colors. Beware of rattlesnakes. If in doubt, use you poles to check rocks and logs before stepping over them. 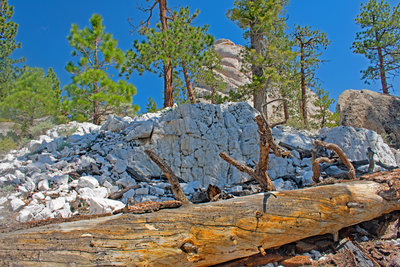