You'll experience forested and lake areas, some rocky and alpine areas, great views of Mt. Jefferson and hike parts of the Pacific Crest Trail on this loop trail. Can be done as a long day hike or an overnight backpack.

This is in the Pamelia Lake limited entry permit area. Permits needed to camp in certain locations on this hike.

After parking at the Pamelia Lake Trail #3439 trailhead start on the trail towards Pamelia Lake. This will take you on a forested trail next to two creeks with evidence of their power by noticing all of the downed trees and course changes. Once you reach Pamelia Lake, there will be some user trails towards the lake but continue on the main train and pass the intersection of the Hunts Creek Trail #3440. Continue right/south. You'll hike next to the lake with plenty of places to stop along the way. Right near the end of the lake is a nice open space for a break.

Continue on the Hunts Creek Trail #3440. You'll cross the creek and start an ascent. You'll come to an intersection of the Hunts Cove Trail which you'll turn left on. At this intersection you'll see a rocky area and jagged peaks. Day # 2 you'll backtrack to here and start an ascent up and around the back of that peak. In the meantime, continue on Hunts Cove Trail to Hanks Lake, and you'll have to cross the creek. On our trip there were a couple of downed trees that we used to make the crossing. During rainy conditions those trees will be slippery so be careful. There are plenty of spaces to camp at Hanks Lake, which we did. Hiking on to Hunts Lake there are fewer spaces and less pressure on the lake from backpackers. I think that Hunts Lake is more picturesque with the backdrop of the steep cliffs on the opposite side of the lake. We ended up spending the night at Hanks Lake.

On the next day, you set off and backtrack to the intersection of Hunts Cove Trail and Hunts Creek Trail #3440 and continue on Hunts Creek Trail #3440 where you'll switchback up and around the back of the ridge. Once you get behind that ridge you'll follow it towards the intersection of the Pacific Crest Trail. There is a trail and downed sign just before the actual intersection of the PCT. This appears to be a trail that goes down to Hunts Lake. I'm not sure if it is still an official trail. Some maps show it others do not. Just a few yards beyond this trail junction is the PCT. Hike along a relatively flat section with some spectacular views of Hunts and Hanks lakes. You'll come to Shale Lakes. Check your maps because the first lake is labeled Shale Lake and on other maps its a little confusing. We ended up camping at the bigger, second lake that is to the right of the PCT. We had a beautiful view of Mt. Jefferson from our site.

Grouse and other mountain birds, deer, and evidence of cougar all seen. During late September there were numerous mushrooms and fungus all along the trail. Some trees started to turn red and yellow. 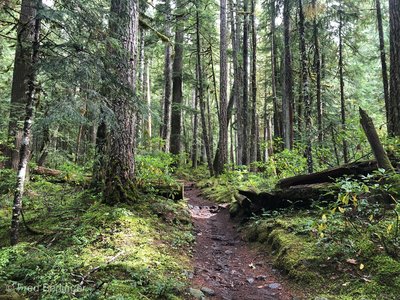 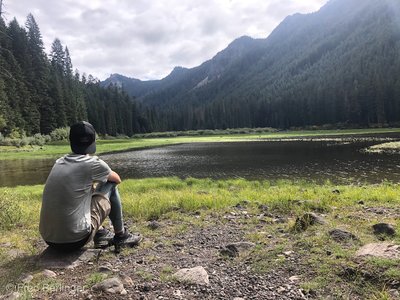 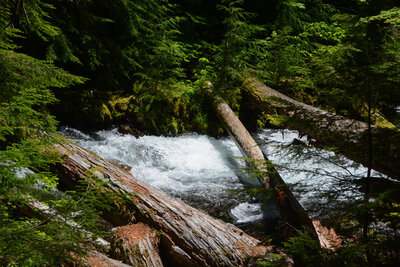 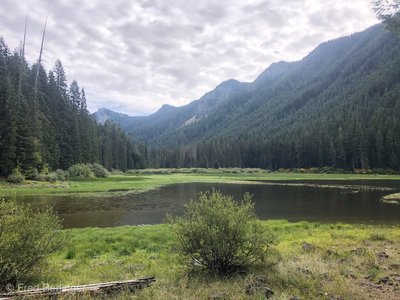 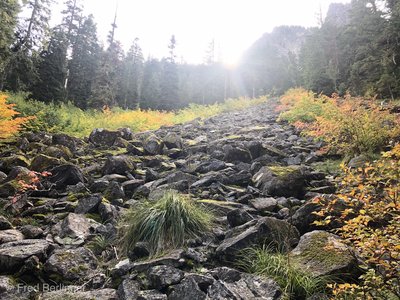 Bear Point Out and Back

Bull of the Woods Lookout