Family Friendly Short, easy trail to two huge, tall very old redwood trees - the Giant Twins. This trail is near drive-in campgrounds and the road providing easy access to it.

Giant Twins Trail is entirely in mixed redwood forest. It is a relatively flat trail with a soft, needle covered narrow path. Less than a tenth of a mile from the Giant Twins Trail/Sprig Trail junction, Giant Twins Trail crosses the paved road leading to the Valley View 2 and 3 drive-in camps. Continuing in the forest, the trail veers left/southeast to follow a hillside for about a third of a mile. The trail winds around on the hillside as it passes a few small seasonal streams. The hillside drops off steeply to the right/southwest providing views through the trees, of the forested Santa Cruz Mountains.

At the 0.45 mile mark, Giant Twins Trail veers right/northeast and gradually climbs the ridge it had been traversing. The climb is short. A tenth of a mile and the Giant Twins are reached. They are two huge, old stately redwoods, over 200 years old, amid several younger redwoods. The Giant Twins must be at least six feet across, dwarfing the younger redwoods which are also very large trees, about two feet across. One of the Giant Twins has a large charred scar from a historical wildfire.

The trail circles the Giant Twins and then ends at the nearby paved road. 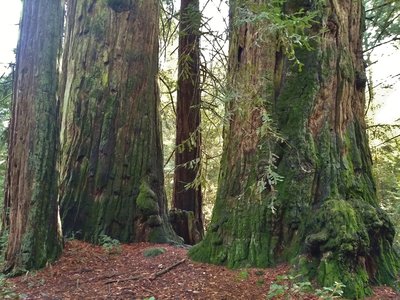 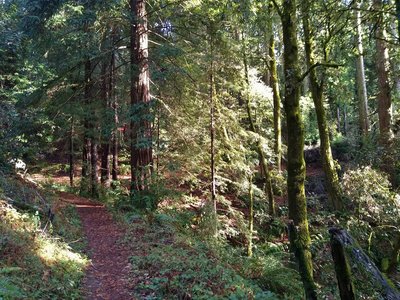 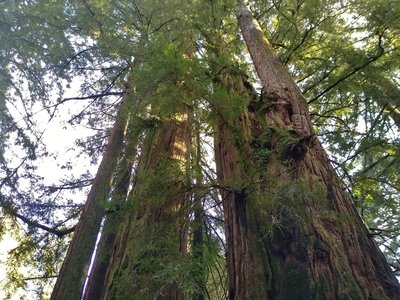 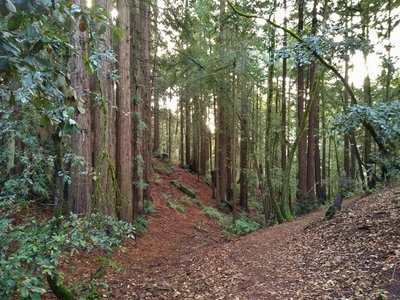 Bald Mountain Out and Back