“A user maintained trail up Archer Mountain with gorge views along the steep ascent. ”

This is a user-built and maintained trail on National Forest land. There are a multitude of other trails near the beginning and a few other viewpoints accessible closer to the top. To get this trail you'll have to drive to the end of Smith-Cripe Road to a turnaround with parking for a good number of cars.

From there start up the unmarked doubletrack (formerly Forest Road 1853) past a gate and into a meadow. Before you exit the meadow on the north side look for a clear trail on your right with an overgrown sign. This is the beginning of Archer Mountain Trail. Continuing on the doubletrack will take you into "High Valley" a former hippie commune with a mess of other informal trails.

From the doubletrack pass through a blackberry thicket and into the woods. Where the trail forks keep to the right and head downhill. A large tree at this fork had a bright blue blaze on it. The trail will switchback down hill for a way until it reaches Archer Creek. A clever bridge of logs with a unique handrail makes crossing easy. After this, the trail will begin a gradual ascent, which quickly becomes a very steep ascent. Numerous small switchbacks help with the ascent but be mindful of the fist-sized scree that much of the trail is comprised of.

The forest will begin to open up as you climb resulting in lovely views of the valley, gorge, and Cape Horn. One of the best viewpoints is a small rocky and mossy point with a lone Douglas fir at the end. Continue climbing until the trail moderates a little at an intersection with a spur to Scott Point. From this viewpoint, you can see ~220 foot Archer Falls in the wet months, but it's dry in the summer.

Continue climbing past an old road that heads north into the closed-off Columbia Falls Natural Area Preserve. You'll soon pass another trail intersection signed as Quiver Trail which leads to Arrow Point. Hereafter the trail is less maintained as you make the final push for the summit. The summit does not have any views, so many hikers choose to hikef to Arrow Point, but that route has become excessively overgrown with raspberries and dangerous giant hogweed. Consequently, Scott Point may be a fine turnaround location.

Be mindful of invasive giant hogweed which is thriving along the trail. The sap of this plant can cause severe phototoxicity (enhanced sunburns). True Queen Anne's lace can be found in the meadows. 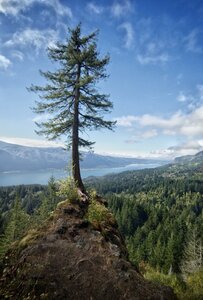 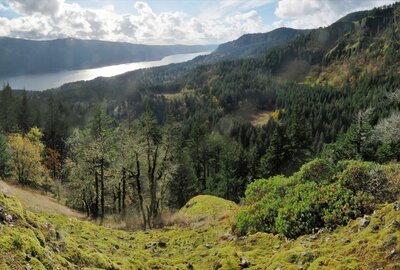 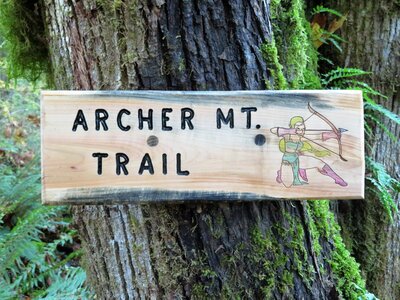 Multnomah Falls Out and Back

Munra Point Out and Back