Hay Pass Trail begins at the north end of Victor Lake, at the lake's inlet creek, where Victor Lake Trail #7115 ends. After crossing the lake's inlet creek from Victor Lake Trail #7115, pick up the trail that veers left/north following the creek upstream at the forest's edge. Climbing gradually, the trail moves away from the creek to go around the east side of a small lake in the grassy meadows at the 0.5 mile mark.

Continuing to climb very gradually, Hay Pass Trail runs through stretches of thin forest, willows, and grassy, rocky areas for the next two and a half miles. Traveling in the creek valley, a dramatic, steep, rocky mountain ridge forming the valley's west side is seen in the open areas. North Fork Peak is at the south end of the ridge, and Round Top Mountain is near the north end. The very north end goes to the Continental Divide forming the west side of Hay Pass.

At the 3.0 mile mark, Lake 10322 comes into view in the meadows ahead. The trail turns left to circle around the lake, crossing the creek again, which is this lake's outlet creek here. Then veering right, the trail follows the lake's west shoreline beneath the towering ridge to the west, And finally, the trail veers right again to go along the north side of the lake for a short ways.

Leaving Lake 10322 behind, at the 3.5 mile mark the trail bends left/north to climb more steeply on the rocky, grassy slopes towards Hay Pass that can be seen ahead. The shelf ahead on the left/west holds Beth Lake (Lake 10755). At the 4.2 mile mark, the Beth Lake output creek is reached. The creek is shallow and wide with no obvious trail across it. Aiming for the pass, cross the creek and look for trail on the other side. After another tenth of a mile, the climb eases. Impressive views of Beth Lake with Round Top Mountain and the rocky mountain ridge rising from its west shoreline are to be admired. Looking back/south, Mt. Victor is the massive mountain on the valley's east side.

Continuing to climb, the trail continues over the rocks with thinner grass now, towards Hay Pass. Hay Pass is soon reached and a whole other world east of the Continental Divide appears - the Middle Fork Bull Lake valley extending into the distance to the northeast. From the pass, climb the low ridge to the left/west to find more views - Dennis Lake and the Golden Lakes valley running northwest. A little further on the ridge, and one can look west to see the U-shaped notch Angel Pass with Angel Peak on its north side.

At lower altitudes - grassy meadows, stretches of pine forest, sections of willows. Higher up - rocky, grassy meadows. Near and at the pass - sparse grass in almost barren, rocky ground. 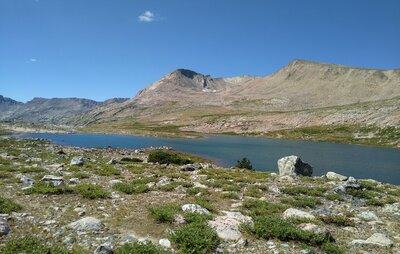 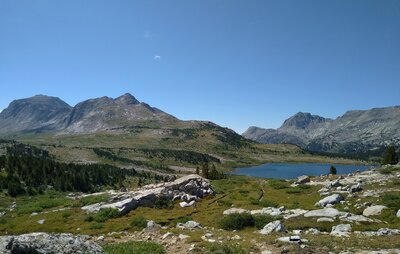 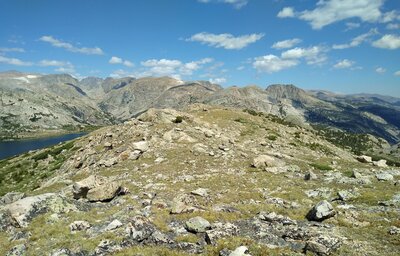 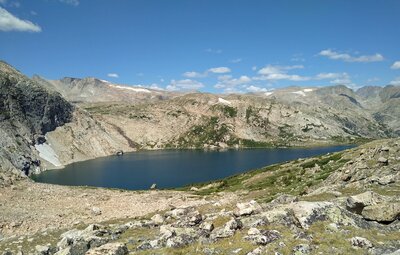 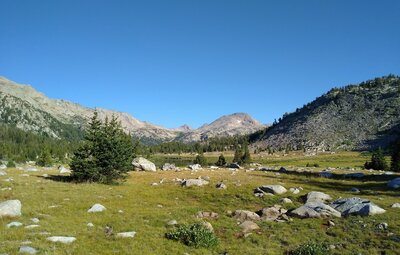 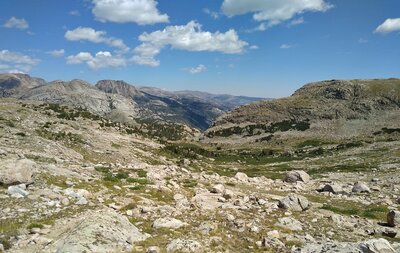