“This tour has it all - deep canyons, rivers, creeks, forests, meadows, and high country of the Eastern Sierra. And more. ”

The road to the trailhead - Horseshoe Meadows Rd., is closed in the winter.

The Eastern Sierra gets less snow than the central and western Sierra. Also being at the south end of the Sierras, snow melts earlier in the area of this hike. All of this combines to make this a great early season hike - ie May. But do be prepared for cold temperatures, patchy snow in places, and possibly new snow.

The Eastern Sierra Tour begins and ends in Inyo National Forest at the Horseshoe Meadows trailhead.

The Tour starts off by heading into the meadows and forested hills of Golden Trout Wilderness, eventually following Golden Trout Creek down into Kern Canyon. At the Canyon bottom, it crosses the wild and beautiful Kern River to enter Sequoia National Park.

Towards the north end of Kern Canyon, where the Kern River drops steeply from the high upper basins of its sources, this Tour parts ways with the Kern River to climb up to the high country. Following, Wallace Creek, it reaches the high country after a short 3 miles, and 2,000 feet of elevation gain. And best of all, amazing views of the Kaweahs and Great Western Divide, Kern Canyon panoramas, and changes in terrain, vegetation, and season over this short 3 miles.

The rest of this Tour is spent in the high country - 10,000 feet more or less, going south on the PCT. Traveling close behind Mt. Whitney, 14,494 ft., one can spend an extra day hiking to the summit of the highest mountain in the continental United States.

This hike begins and ends in Golden Trout Wilderness, Land Manager USFS - Inyo National Forest Office, where dogs are allowed. However, dogs are not allowed in Sequoia National Park where more than half of this hike travels.

A permit is needed for this overnight hike. This permit can be reserved on recreation.gov, entry point Trail Pass, and then picked up at the Inyo National Forest - Eastern Sierra Visitor Center, 2 miles south of Lone Pine off Hwy 395.

Golden Trout Wildrness - Trail Start to Lower Kern Bridge (Mile 0 - 20)
At the Horseshoe Meadow trailhead sign at the end of the parking area, the Tour begins. After a half mile go left at a trail fork onto Trail Pass Trail to head off across Horseshoe Meadow, the first of many meadows. These meadows are a mix of sandy areas and low vegetation. Forested hills surround and separate these meadows. At the far side of Horseshoe Meadow, the trail enters forest, and climbs to Trail Pass. After dropping down the other side of the pass, for the next 7 miles, the trail crosses sandy areas and meadows, all surrounded by forested hills.

After 11 miles, one finds themself on Golden Trout Creek Trail that follows Golden Trout Creek downstream until the creek empties into the Kern River. Undergrowth is thicker and meadows are grassier. Nearing the Kern Canyon/River, the creek is down in a valley that becomes deeper with steeper, rockier sides as both trail and creek descend. A natural bridge is crossed, impressive cliffs appear, and the trail soon reaches a stretch of rocky, switchbacks down the Kern Canyon cliffs to the Kern River.

Kern Canyon - Lower Kern Bridge to Junction Meadow trail camp(MIle 20 - 39 )
Kern River is crossed on the impressive Lower Kern Bridge, and the trail veers north to follow the River upstream for the next 19 miles. Kern Canyon walls are 1,000 - 3,000 foot cliffs with the Kern River flowing along the Canyon floor. In places the trail is next to the River, and other places it's a bit further away with the River seen through the trees. Although the trail stays near (or at) the bottom of Kern Canyon without ever climbing the Canyon's walls, sometimes it looks down on the River, and other times it runs at the same level as the River. The Canyon bottom is mostly forest, beautiful sequoia forest. The trail travels through the sequoia forest, but occasionally breaks out of the forest when the hillside is too steep for trees right at the foot of the Canyon walls and rock slides. Along the River, are small, grassy meadows in places, however the trail does not run through these fragile, pristine meadows.

Climb out of Kern Canyon - Junction Meadow trail camp to PCT(Mile 39 - 42.5)
After passing Junction Meadow, the trail begins to leave Kern River and climb out of Kern Canyon. A trail junction is reached after about a mile - follow the arrow to stay on the High Sierra Trail. For the next 3 miles, the trail climbs along Wallace Creek, above the creek, in its steep sided valley. This is a very scenic stretch - views down Kern Canyon, the Kaweahs and Great Western Divide, and the steeply cascading Wallace Creek with its mini-waterfalls all contribute to the beauty. Wright Creek is crossed with waterfalls on both sides of the trail.

High Country - Along the PCT to Trail End (Mile 42.5 - 70)
After climbing along Wallace Creek, the trail meets up with the PCT and turns south to travel along the PCT. Now in the Sierra high country, the trail is at 9,500 - 11,500 feet with ups and downs, for the rest of this Tour. The terrain is thinly forested, with no undergrowth, and dotted with occassional small meadows along the way. Heading south on the PCT, Wallace Creek is crossed, the trail goes over its first ridge, Mt Guyot appears to the south, and the trail drops down to Crabtree Meadows, a popular place for a side trip up Mt. Whitney. Continuing on, the trail goes over another ridge, and then passes Mt Guyot at Guyot Pass. A long descent then brings one to the Rock Creek crossing. Leaving Rock Creek behind, the trail climbs Siberian Outpost, a high ridge with great views. After a 6 mile ridge walk, the trail drops down, re-enters Golden Trout Wilderness, passes Chicken Spring Lake, and goes over Cottonwood Pass to end the Tour where it started.

Everything from sandy flats to grassy meadows and low vegetation meadows, pine forested hills, sequoia forests, thin fir forested high country with no undergrowth, and barren rocky areas. Deer, bears, coyotes or foxes, rattlesnakes in some exposed rocky places, and small animals, depending on where in this Tour, all live here. 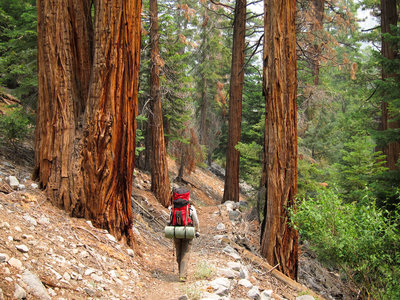 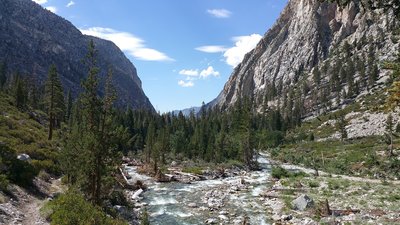 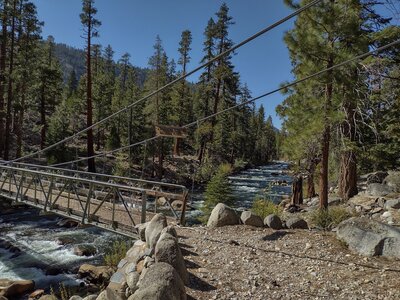 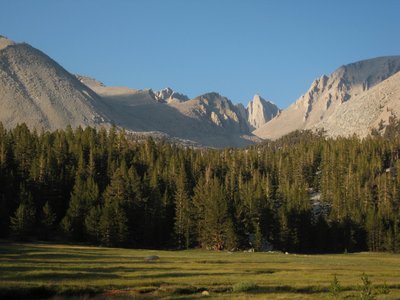 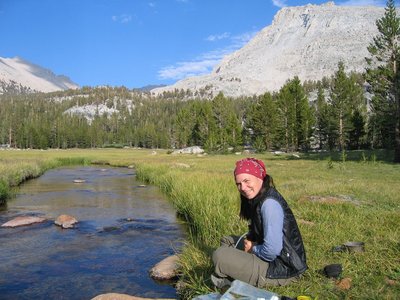 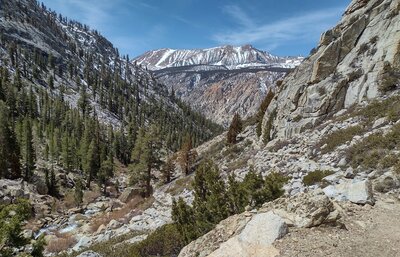